If you thought Zombie Strike blasters were a bit over the top then welcome to Doomlands, NERF’s most extreme blasters! The year is 2169 and the world as we know it has come to end; the landscape is barren and lawlessness prevails. The only way to survive is to grab your trusty Doomlands blaster and bring peace to the land!

In other words, the NERF Doomlands range are packing a lot of firepower, expect simultaneous firing, massive blasters and some crazy aesthetics. Blasters in the Doomlands range fire standard Elite ammunition but most will come with themed darts.

If you like the sound of protecting humanity with your trusty blaster, or just want a slightly odd looking blaster, our Top NERF Doomlands 2169 Blasters guide is here to help.

The Judge is perhaps the epitome of the NERF Doomlands range. Literally everything on this gun is over the top – a huge 30 dart drum, 3 shot simultaneous firing and an old NERF Reviews favorite, pump action priming! If you want to make an impression of the blasting field then definitely get this blaster.

Now, let’s get into the specifics. The Judge isn’t a motorized blaster so you won’t need any batteries to get this monster going. Instead, the Judge makes use of a pump action priming mechanism located at the bottom of the blaster which means you can fire the blaster as quickly as you can get it primed. Be warned though, with a 30 dart drum you are going get tired pretty quickly.

The most impressive (and perhaps daunting) aspects of the Judge is the massive front mounted 30 dart drum which contains 10 unique 3 dart triangular barrels. Not only is the huge barrel a site to behold but is also means that each shot will unleash 3 darts at your enemies simultaneously!

The NERF Doomlands Judge is an absolutely savage blaster and comes with 30 Doomlands themed Elite darts. As there are no batteries required you can get the Judge working straight out of the box.

$144.95 $78.99
FIRES 3 DARTS WITH EVERY PULL OF THE TRIGGER: The Judge toy blaster shoots 3 darts at a time with every prime and pull of the trigger 30-DART REVOLVING DRUM: This Nerf Doomlands blaster has a huge 30-dart revolving drum for massive dart-firing fun IN... read more
Check Price 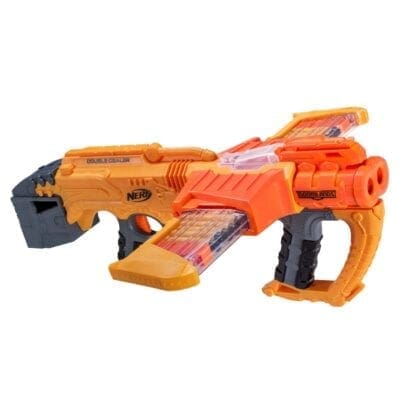 Fires 4 darts in a row

One of the worst things about NERF blasting is the constant need to reload and the all too familiar moment of horror when you realize you have jumped headfirst into a battle with no darts left in the chamber. The NERF Doomlands 2169 Double Dealer blaster is here to help.

The Double Dealer has an insane 24 dart capacity thanks to the inclusion of two, horizontally loaded, clips meaning you can keep blasting for longer! The iconic Doomlands transparent window inclusion also massively helps out on the Double Dealer, each clip is transparent meaning you can see how many darts you have left (it is also pretty cool to see your clip deplete as you deliver justice across the field).

The Doomlands Double Dealer is an absolute pleasure to use. Load up your two 12 darts clips and “pump” the slam-action action primer and you are ready to play and oh, did we mention that it fires two darts at a time! The clips are spring-loaded so with each shot and pump 2 new darts will be pushed into the chamber.

The Double Dealer comes with a rather generous compliment of 24 Doomlands darts. Leave your opponents quacking in their boots with this portable ammo dump! 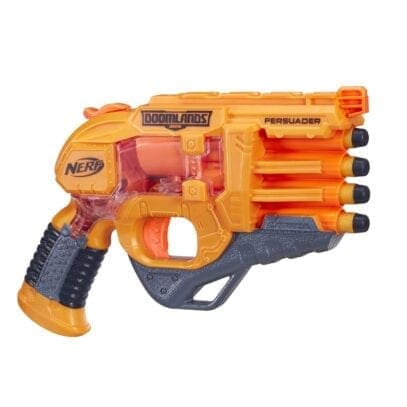 Fires 4 darts in a row

One of the things we love about the NERF Doomlands 2169 blasters are the names. Hasbro obviously took some artistic license thinking these bad boys up and the Persuader blaster is no different.

If your idea of persuading your opponents is to blast them away with four darts in a row then you may have found your perfect blaster.

The main draw to the Persuader is its intimidating visage. Featuring four vertically aligned barrels, load up to four, pull back the hammer and start taking down outlaws. Each shot needs to be cocked but with the easy slide down hammer this is an absolute breeze.

One thing to keep in mind is that the Persuader fires from top to bottom so make sure that you adjust your aim as you blast. Another cool feature of the Doomlands Persuader is that it features a transparent cover over the firing mechanism. If you have ever wondered about the inner workings of your blaster now you can take a look and keep unleashing dart mayhem in the process.

The Persuader is one of the larger blasters which can be fired one-handed and the fact that you can rack up 4 shots with no reloading means that it is pretty versatile. The Doomlands Persuader may not be the ultimate blaster but it is a good addition to any arsenal. The blaster comes with 4 Doomlands darts so you can get blasting straight away.

$14.99 $13.99
HAMMER-ACTION BLASTING: Pull back the hammer and press the trigger to start blasting with the Persuader Nerf Doomlands blaster that’s powered by you -- no batteries required FIRE 4 DARTS IN A ROW FROM THE 4-BARREL BLASTER: Shoot 4 darts in a row from... read more
Check Price 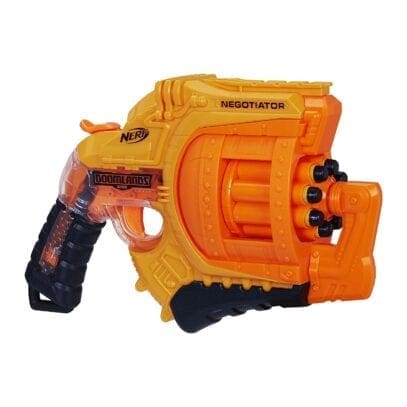 Fires 8 darts in a row

The NERF Doomlands 2169 Negotiator continues the trend of ironic blaster naming. If you liked the Doomlands Persuader but though it was a little too small then you may be interested in the Negotiator.

“Negotiate some justice” with this hammer action, 8 dart rotating barreled, blaster. Load up to 8 Doomlands darts into the rotating drum and fire away. The Negotiator isn’t automatic so each shot does require you to cock the hammer (a simple thumb switch) but once you master the action you will be sending a steady stream of darts wherever you aim. As the barrel rotates for each shot, you won’t need to adjust you aim so once you have found your target you can keep flinging darts until you need to reload.

The addition of a transparent window into the firing mechanism is a nice touch but doesn’t add anything to the actual blasting experience so is purely aesthetic (but it is quite cool to see what is going on inside…).

The Negotiater is a nice one handed blaster but is a bit on the large side so the decision between the Negotiator and Persuader is really down to personal preference. The blaster comes with 8 Doomlands Darts so you won’t need to buy any more before you start blasting.

$32.00
Hammer-action blasting: prime and fire by pulling back the hammer and pressing the trigger to blast into dart-shooting adventures with the Negotiator Nerf doomlands blaster -- no batteries required Fire 8 darts in a row from the rotating 8-dart drum:... read more
Check Price 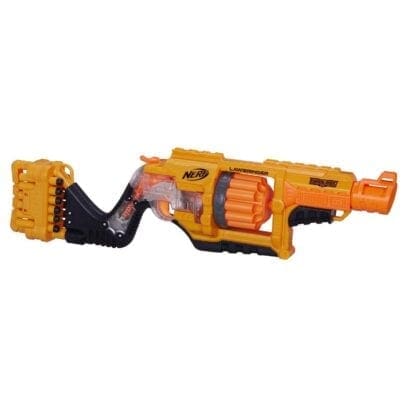 Dart storage in the stock

We’re not sure why but for some reason we really like the NERF Doomlands 2169 Lawbringer blaster. It may be that is reminds us of Judge Dredd or that it can fire up to 12 darts before reloading, either way, we love it!

The Lawbringer is relatively simple blaster engineered to perfection, once you have loaded up the 12 dart (!) rotating drum all you need to do is pull back the hammer with your thumb and get blasting. Although the Doomlands Lawbringer is pretty big, it is incredibly light so you can fire one-handed (and strike a fierce figure on the blasting field).

The Doomlands Lawbringer features a transparent window around the firing mechanism, so if you were ever interested in how your blaster sent darts flying now you can see! As the Lawbringer features an extended stock you actual great level of stability, allowing you to really take time in lining up your shot and sniping opponents across the field. The final trick is the inclusion of 12 dart storage in the blaster stock which means you can carry an entire drum worth of darts as you move around. The Lawbringer comes with 12 Doomlands darts and is definitely one of our favorites

If you are partial to pump-action NERF blasters then you may want to check out the NERF Doomlands 2169 Vagabond blaster. With every pump of the handle another dart is lined up thanks to the 6 Dart drum barrel; pump your blaster and fire away!

The Vagabond doesn’t really bring anything new to the table but if you like rotating drums and prefer the weight of a two handed blaster then you can’t go too far wrong with this one. If you are looking for something a little lighter, we would recommend looking at Doomlands Negotiator which is more compact and features an 8 dart rotating drum instead of six.